A New Approach to Education for the Smartphone Generation 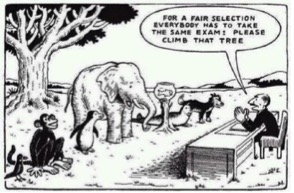 The picture above, whose author and date of publication remains unknown, is taken from Google Images.  The author very aptly portrays our current education system.  Albert Einstein said, “Everybody is a genius. But if you judge a fish by its ability to climb a tree, it will live its whole life believing that it is stupid”.  According to the American developmental psychologist from Harvard, Howard Gardner, there are eight types of intelligences.  They are logical-mathematical, verbal-linguistic, bodily-kinaesthetic, visual-spatial, musical-rhythmic and harmonic, naturalistic, intrapersonal and interpersonal intelligences.  Logical-mathematical intelligence plays a wide role in almost all spheres of learning, and especially in finance, accounting and science.  Verbal-linguistic intelligence is key in sectors dealing with communication.  Bodily-kinaesthetic intelligence is prized in sports, arts and crafts.  Visual-spatial intelligence is highly valued in sectors dealing with navigation, transportation, advertising and media.  Musical-rhythmic and harmonic intelligence is crucial for the entertainment industry.  Naturalistic intelligence is much needed but not limited to plant and animal life, ecology, environment, food and textile industries.  Intrapersonal and interpersonal intelligences are required for almost all sectors, but more so for the ones that deal with public interaction.

As we enter the Age of Information from the Age of Industrialization, most traditional jobs are soon going to be made obsolete by the oncoming digital disruption.  Automation due to Artificial Intelligence (AI), Machine Learning (ML) and Robotics is going to shake up sectors related to data collection, data processing and most of the labor-intensive work.  The future looks unpredictable with the digital technological advancements of the 21stcentury.  Almost every job in the future will require some understanding of computers and digital technologies.  According to the British educationist, Sir Ken Robinson, 65% of the work, elementary school students of today will be doing in the future, does not even exist yet. So how are we to prepare them for this future?

The current education system is not designed to teach these digital natives or iGen (referring to those born after the year 1995).  Today’s students are the first generation born into this technology, which has become an integral part of their lives.  These digital natives are surrounded by smartphones, tablets and laptops.  They play with connected gadgets and toys, go online for gaming, instant messaging, streaming digital music and literally live in the virtual world on social media.  They have access to a vast amount of information at the click of a button in the palm of their hands.  They prefer to tell the time by checking the digital screens on their cell phones rather than an analogue watch on their wrists!  Some parents even hand over a cell phone to an infant to chew on, as if it is a teething device! Some thrust a cell phone in the hands of a toddler to avoid a tantrum and to calm down.  As for the teenagers of today, they are constantly plugged in and tuned out of their natural environment.  Some even pose a danger on the roads with distracted walking as well as distracted riding while checking their smartphones, very precariously.  Digital technologies are highly addictive and distractive.  Smartphones are steadily permeating life and living, and replacing just about everything.  They are increasingly being used to seek information, for education, shopping, banking, entertainment as well as for governing.  Some observations about the current digital generation is that they are more sedentary, play less outdoors, constantly hold their heads down, do not like to take notes or write, avoid interacting with people face-to-face, prefer quick food to traditional food, wish to be left alone with their smartphones and are high on instant gratification.  They are also well-informed, safer as they are mostly indoors and well aware of the problems facing their planet.  Borders fade for them as they have friends from all over the world through interactions, via the Internet.

If one is not careful with the use of digital technology, it can easily misguide, misinform and disengage, leading to disharmony.  When children are constantly exposed to macabre online games and videos, they get immune to the violence and bloodshed showcased by some of these online contents.  They start thinking it is normal to kill people and begin to behave less empathetically.  So much so, World Health Organization (WHO), in June 2018 has termed excessive online gaming as a mental health disorder.  The Medical Director of The Psychiatric University Hospital in Ulm, Germany and a neuroscientist, Manfred Spitzer, uses the term “Digital Dementia” to denote the breakdown of cognitive abilities due to the overuse of digital technology.  Doctors in South Korea, China and Japan recognised this problem much earlier and have set up rehabilitation centres to cure ‘gadget addiction.’  This problem is on the rise in India as well.  As early as 2014, a gadget de-addiction centre called Services for Healthy Use of Technology (SHUT) Clinic was set up by the National Institute of Mental Health and Neurosciences (NIMHANS) in Bengaluru.  It has treated 300 patients so far, between the ages of 16 to 22 years.  In 2016, All India Institute of Medical Sciences (AIIMS), New Delhi, set up the Behavioural Addictions Clinic (BAC), initiated by the Department of Psychiatry and National Drug Dependence Treatment Center (NDDTC), to offer assessment and intervention services for behavioral addictions in an outpatient setting.  This February, TTK Hospital in Indira Nagar, Chennai, admitted its first gaming addict for treatment.

A recent study published in Environmental Health Perspectives in July 2018, by the Swiss Tropical and Public Health Institute has cautioned adolescents against excessive smartphone use, as it leads to memory impairment.  Extensive research has shown that excessive digital technology use causes problems with cognition, behavioural addictions, isolation, depression, self-injury, suicidal ideation, and basically, poor mental health.  No doubt, the smartphone entertains as well as educates, but in classrooms, it is a source of distraction.  The main concern is how to impart a meaningful education to the digital natives to keep pace with this digital apocalyptic change happening right beneath our feet. Should the battery of standardized testing, the students of today are put through, be replaced with more meaningful ones, tailor-made for the different intelligences?

A New Paradigm in Education

Some educationists feel that the future is not going to be about solving a sum but more about painting a picture, as the Age of Imagination will soon replace the Age of Information.  It will be about Experiential Learning (EL) where key literacies in demand will be data literacy, technology literacy and human literacy.  Academic instituitions must adopt a cross-functional inter-disciplinary approach to education.  Apart from scientific and mathematical aptitudes, knowledge of literature and history, the next generation of students also require diverse skills such as adaptability, teamwork, ethics and values, and problem-solving under conditions of constraints in a world with dwindling resources and burgeoning population.  Instead of teaching students how to answer questions, they should be taught how to ask questions.  To solve a problem, they must be taught to think holistically about the problem, to have a multi-disciplinary perspective and to connect the dots in a meaningful way.  This phenomenon-based learning is a better pedagogy for the smartphone-obsessed generation rather than subject-based learning.  Machines can solve an individual problem, but they cannot analyze in an integrated way like a human.  There is a need to develop a sense of initiative and resilience, and solve the grand challenges facing our planet.  Children must be taught to collaborate and work as a team with others from diverse backgrounds and cultures.  Parents, teachers and caregivers must learn about digital technologies to keep pace with the fast-changing world of Internet, so that they can guide the young people to navigate the digital superhighway responsibly.

To meet these challenges of the 21st century, India is in a unique position to nudge the world towards a happy and healthy living with its ancient wisdom and spiritual traditions.  The world has woken up to the facts, which are now being validated by modern sciences, that the ancient Indian philosophy on how to live a purposeful life holds good for these perplexing modern times.  It emphasizes on a life of compassion, contemplation, meditation and yoga.  Meditation and yoga aid in the process of neurogenesis where new neurons are formed due to the ability of the brain to change the quality of connections between the neurons through neuroplasticity, thereby increasing memory, attention and empathy.

Digital technology is a double edged-sword, and depending on its use, it can be very promising or perilous.  This is indeed a marvelous technology and its benefits are manifold.  Not everyone who uses a digital gadget is an addict.  It becomes harmful when the users lose control in such a way that it supplants their duties and priorities.  Balance and moderation in use are key.  The parents and teachers of the digital natives must teach them to unplug, have an open conversation, provide guidance, have a plan, set boundaries, stick to the rules and lay out the consequences.  There is an urgent need to kickstart a healthy relationship with technology, especially among the younger generation, nourish the body, as well as, the mind with healthy foods and prudent positive thoughts.

Excerpted and adapted from the book ‘The Digital Pied Piper Effect’ (2018) by Sivani Saravanamuttu, available in Kindle and Print editions.